This year we were fortunate enough not to find any new AIS as part of our Early Response and Detection efforts. Eight Lakes were sampled for Dreissena polymorpha, commonly known as Zebra Mussels, and no lakes sampled showed a reproducing population. This approach to early detection and monitoring can be more effective than settling plates or monitoring docks alone, as we may find evidence of infestation early in their colonization before they are widely established. The AIS Program will continue these monitoring measures on our High-Risk water bodies in 2022.

However, Lake Francis is believed to have zebra mussels though MN DNR has not yet confirmed it. This summer, the AIS Program has staffed Lake Francis with a watercraft inspector as part of our county-wide program. This will be the case in 2022, as we are treating the lake as infested, pending further confirmation out of an abundance of caution. We ask that the community be vigilant in their clean drain and dry efforts and follow the law when transporting docks or lift from a body of water by allowing them to dry for a full 21 days before installation into a new water body. 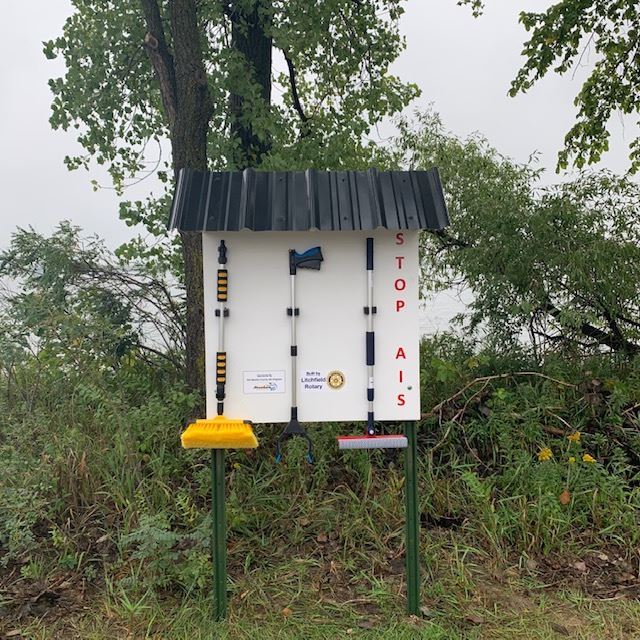 To reduce barriers to best actions ( Clean Drain Dry ), New AIS Tool Stations were installed at 3 Public Water Accesses over Labor Day weekend. These stations were generously constructed by the Litchfield Rotary Club and Sponsored by the AIS Program. The program will place these and similar stations at a handful of additional lakes from April to October. These stations provide the community with publicly accessible tools to properly and more easily clean their watercraft when leaving a launch.  By following CDD rules and respecting the lakes and the community's investment in them, watercraft users have contributed to a culture locally that has yielded more stable, bountiful, and beautiful lakes. Please continue to do so, by using these resources when needed!

The State of Minnesota's Department of Natural Resources has confirmed that Lake Minnie Belle has Dreissena polymorpha, commonly known as Zebra Mussels. The Community, Lake Association, and County's efforts have held this aquatic nuisance at bay for years since they were confirmed in 2 other Meeker County Lakes. Given Zebra Mussels' life history and population dynamics, the distinction that their presence is not new but was likely undetectable (for the method of monitoring in place) in previous seasons is important to note. With time they have reached a point of becoming even passively detectable. While this news is disheartening for many who have invested themselves in preservation efforts, it does bring to light the contrast between different monitoring practices and the need for a County led monitoring effort.  Anticipating such a need, changes to the County Program have been underway since late 2019. Meeker County developed Rapid Response Protocols and added a permanent and renewing budget item for New Infestation Response. Veliger Tows are another early detection method, which was newly eligible for full reimbursement under the AIS Program in 2020.

In 2021, Meeker County's prevention efforts will be adaptive and account for this news by not only monitoring our lakes at greatest risk for Zebra Mussels (using such early detection methods) but also by continuing and expanding the financial and logistical AIS assistance offered to the community. Currently, the County is exploring options for density and distribution estimates, mitigation efforts, and responsive monitoring in 2021.